Fresno, CA – Joe Ozier wandered into a Florida animal shelter to research his developing new musical. He had no idea that he’d be leaving with a Border Collie that would literally change his outlook on life. Meeting Shea resulted in Joe Ozier’s first published children’s book entitled Shea’s Lounge.

From his early teens, Joe has been a writer.  He dabbled in Science Fiction, Short Stories, Poetry, Lyrics and Haiku’s.

In the late 1990’s, Joe moved to Florida with his dog Shep and began performing in and writing Stage Plays and Musicals.  During the 6 or so years, Joe became a working professional Stage, Film and Television Actor, and Writer.

Joe’s love for dogs and his developing knowledge of their behavior began with his family dogs. Joe’s childhood experiences led him towards his first theatrical show and a ten year endeavor entitled, “ Shep The Musical”.

Shea Was a Clever Escape Artist

Joe spotted Shea at the local Florida Humane Society and realized that Shea had “that something special”. When Joe brought Shea home, he discovered that Shea was an escape artist.  Shea was recently caught by the SPCA only a week before Joe adopted her.  Shea’s savvy street smart spirit became the inspiration for the true story of Shea’s life entitled Shea’s Lounge. Get your copy here on EBAY

In April of 2011, Joe Ozier began professionally connecting dogs to their people under the name…Way of a Dog. Joe loves going to work and teaching dog owners how to get into their dog’s heads.  On July 7, 2014, Joe’s first professional book was published entitled Shea’s Lounge. It’s the story of a runaway dog that found her forever home.  Get your copy on Amazon here.

Go To The Shea’s Lounge Page

This Family and Children’s Book was Written by Joe Ozier.  ‘Shea’s Lounge: The story of a runaway dog that found her forever home’. Joe invites his readers to recount the author’s real-life adventure of rehoming a “street wise” Border Collie.  Before the day Joe adopted Shea, she had spent two years living on Florida’s streets.

Ozier quickly had to accept that Shea had traits and behaviors he couldn’t easily or quickly change. I hoped that a loving home of acceptance was the key to giving Shea the life she craved.

Through his uplifting children’s story, Ozier strives to raise awareness for the adoption of shelter animals.  This story may help some readers prepare for the process of accepting often-troubled dogs into their homes.

What It Takes to Successfully Adopt a Shelter Dog

Ozier faced both triumphs and defeats when opening up his home and his heart to Shea. His experience was so gratifying that he has released the story as a powerful new children and family book.

‘Shea’s Lounge: The story of a runaway dog that found her forever home’. This book gives a rare insight into just what it takes to successfully adopt a shelter dog. The story is as thought-provoking as it is entertaining.

Shea’s Lounge is the story of Shea, the Runaway.  A female Border collie who spent two years living alone on the streets of Florida. One of the Firemen felt sorry for her, and wanted her to find a real home.  He caught her while she was begging for food, then drove her to the closest animal shelter and given a bath.

On the very first day she was available for adoption, Joe entered the shelter “just to look around”.  When he heard Shea woof at him, it was love at first sight.

Where to Find Joe Ozier Online

Where to Buy Shea’s Lounge in Print 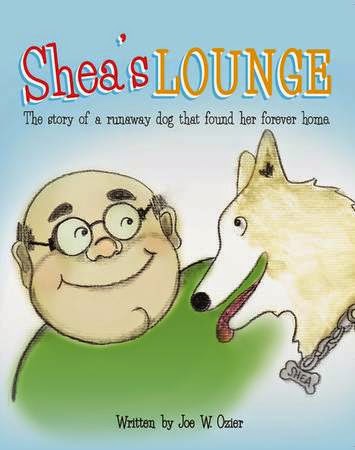 What can I say about Shea, the runaway?

I was lucky enough to have Shea for 10 years, and she absolutely lived a good life.  I took her and Shep on my sit on top kayak, through some of Florida’s most pristine waterways and some rivers with water so clean you could drink it while you’re swimming in it…seriously.  Shea got to live the theater life alongside Shep, the wonder dog.  At first, Shea and Shep ignored each other, and occasionally growled at each other, but Shea just kept escaping and giving me a clear sign she wanted to be somewhere else.

I Had the Option of Returning Her

I had the option of returning her within a month, and I was only three days away from that possibility.  In the months after I decided to keep her, Shea’s attention to all of the details on the wind became less and less, and into more of howling ghosts she had rather forget.  I saw her face change from happy to terrified to curious and nerve racking…I even watched her begin shivering and I was facing a dilemma because I wanted to give her comfort but I also had the curious scientist side who wanted to observe nature in the raw.

Shea Was always in the Drivers Seat

Shea was a master listener, unlike Shep, she could understand a calm assertive voice and she learned quickly. Her thoughts were so interesting to watch as her ears and face and head tilted as if she was taking dictation from the win. There were many times I stared at her without her noticing, and just watched aas her eyes dashed too and fro and her ears twitched to even the most distant barking.   She would stay focused during our lessons and rehearsals.  I arranged for Shea to accompany Shep in live audience filled shows.

Shea learned to be a performer and to listen and respond on cue. Shep was very keen at his commands and rarely diverted his routine within the 16- 22 performances any play or musical might run over a 3-4 week span.  I could actually see Shea pumping herself up before she appeared in front of the audience, whining to get out and begin her shows.  Shep never really swayed much from his show performances, but when he did… it was big. lol

Shea was always fairly present and responded to my commands. I tested her everywhere I took my dogs. Shep had gone through the drill with me years earlier in CA.  I always had them off leash and yet firmly on my voice leash or what I call my extended leash, that can go as far as the dog can either see or hear me.  I had that opportunity to test in Florida because after rowing across the inter-coastal waterway from my home, I would take my dogs to a barrier island named Midnight Pass that had miles of beaches in both directions, and very few people in a mile in each direction.

Fresno, Clovis, Madera, Visalia, Hanford, Tulare, Oakhurst, and other communities within 50 miles of Fresno in the California Central Valley.

Great! Please send me a few details. I'll call you right away.

5 Things You Must Know Before Hiring a Dog Trainer

Would you like to have a quick chat to find out if my training program is right for you and your dog? There’s no obligation, and it’s free!

Sure, Let's Talk
I'm Not Ready